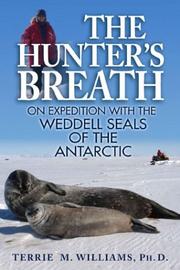 In her new book, The Hunter's Breath, Williams interweaves two amazing stories from those expeditions: One is the story of the seals and their remarkable adaptations to life on and beneath the Antarctic sea ice, while the other is a human story of adventure and discovery in one of the most punishing environments on Earth. Hunter's Oath follows two boys named Stephen and Gilliam of Elseth. One from the streets (Stephen) and the other born of noble blood (Gilliam), and they are hunters. The Hunters/Huntbrothers go out once a year to go on a hunt (yeah) were one of them inevitably dies, pleasing the god of the hunt and grants them another year of food/5(53). The first book (The Hunters) in his new series is currently being made into a major motion picture, and his latest book (The Prisoner's Gold) won the ITW Thriller Award for Book of the s: “THE HUNTERS kicks off a brilliant new series from Chris Kuzneski. Adventure, history, mystery, and more—everything you’d want in a thriller!” The Daily Mail (UK)— “THE HUNTERS is taut and fierce—with a cast of agreeably idiosyncratic characters. It feels like the draft of a movie, and it could just be Kuzneski’s breakthrough s:

This is one of those books that is so far up my street that it's bought a house, moved in and is popping round to borrow a cup of sugar. It's a tale of a team of people brought together by a mysterious benefactor to retrieve missing/stolen/lost historical treasures from around the globe/5(). No part of this book may be reproduced in any form or by any means without the prior written consent of the author, with the exception of brief quotas used in reviews. This is a work of fiction. Names, characters, businesses, places, events, and incidents are either the products of the author’s imagination or are used in a fictitious manner. Creator David Weil's inspiration for Hunters was bedtime stories of World War II experiences told by his grandmother Sarah, who was a survivor of the Auschwitz camp Birkenau; the stories had a long-lasting impact on David because they were about "great good vs. terrifying evil" and had themes of "hope, courage and survival," elements he also noticed in comic book superhero stories he would read. The Hunters is James Salter 's debut novel and a tale of USAF fighter pilots during the Korean War, first published in The novel was the basis for the film adaptation of the novel starring Robert Mitchum and Robert Wagner with a different storyline.